I am sure many of you have opened your monthly electricity bill only to feel a little bit of panic rising as your mind tries to comprehend the number before you. In my case it was the eye-watering $601.3, which was laid before me.

If you are anything like me, your mind raced to figure out what happened, right!?…Did we perhaps leave something on for a while, like a heater, the oven or a few split-system air conditioners? The heating appliances are typically the biggest energy consumers and air conditioners (in aggregate, if you have more than one split-system) can also result in some hefty numbers, especially if these are used days on end.

These values in my bill are daily averages and gave me the insight that we ran a daily average consumption of a whopping 85.04kWh for September, …ouch!!. If you take the average daily cost and divide it by the average daily consumption, the numbers in the purple box, you may observe what the energy company charges me, per kWh of electrical energy. In this case this calculates to a rate of about 25.3c per unit for September. Not cheap by any stretch of the imagination and one of the main reasons that Australia has some of the highest roof-top PV penetration levels worldwide.

As I rent the house I live in, solar Rooftop PV isn’t an option for me. The house has solar pool heating whereby water is pumped to black heat receivers on the roof of the house. 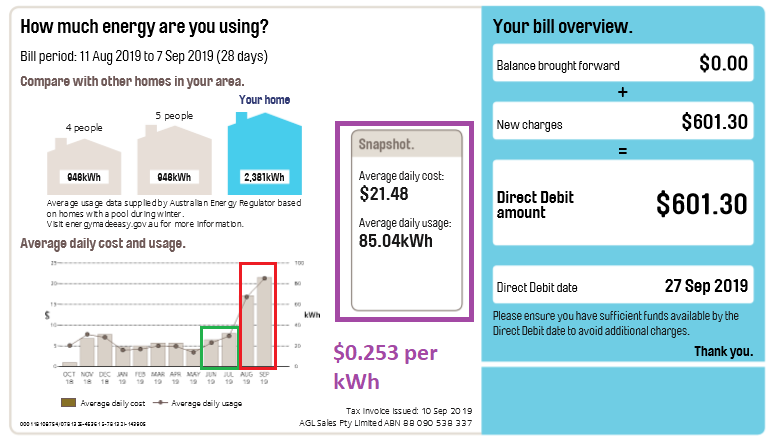 The greater sense of dread comes from a feeling of: “Is this is our new bill going forward”? The first thing to do is check the meter reading (on my energy meter I have to read each digit from its corresponding dial for the various unit denominations: 10,000s, 1000s, 100s, 10 and 1 units, see the meter dials on the meter in the photograph below) and then confirm that the energy retailer has the correct numbers. 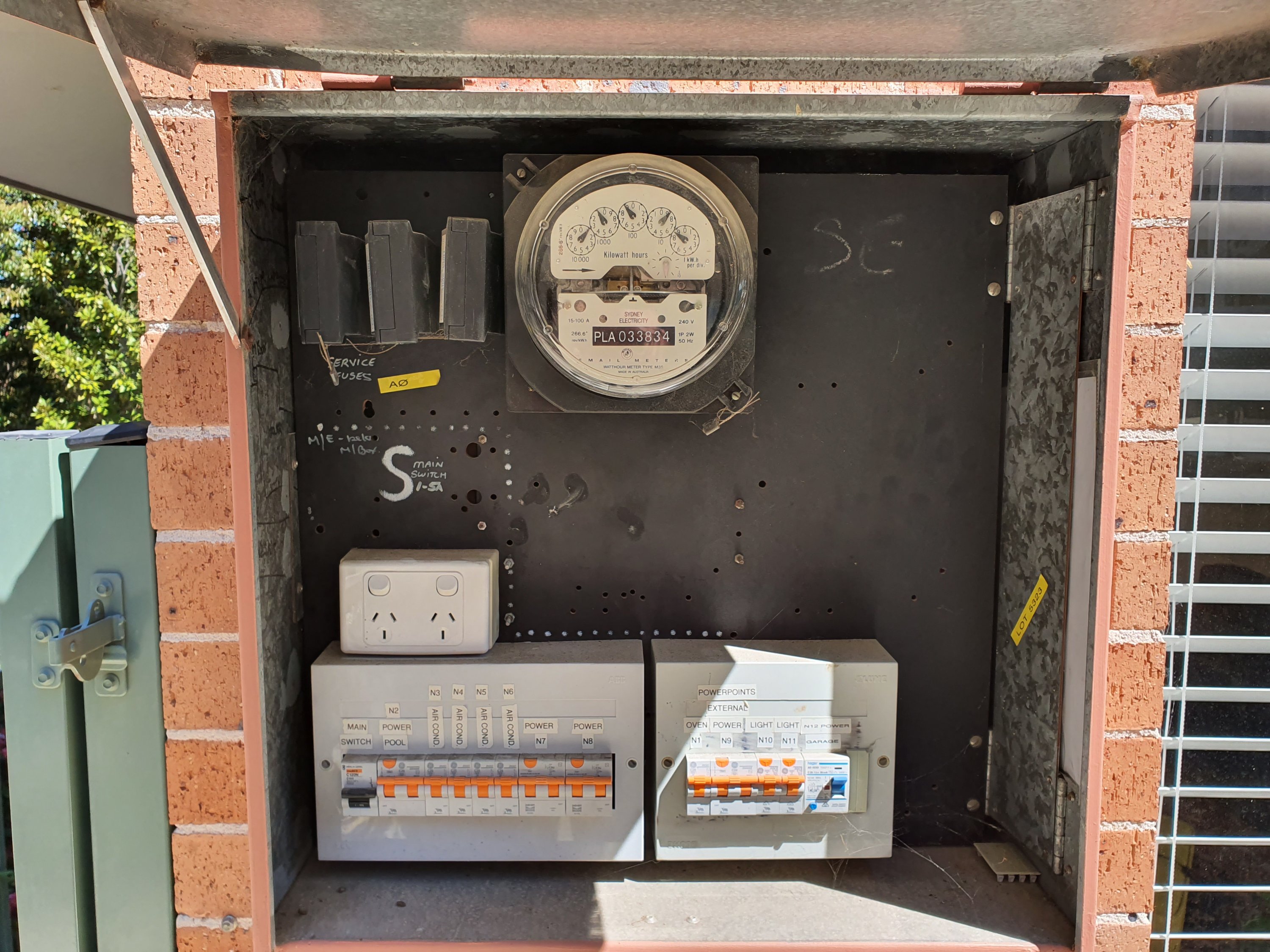 I my case, by analysing the bill I discovered that the problem was actually due to the readings being higher than the estimate that the energy company used. They seem to take the average over the last three months if they don’t have a meter reading.

When our consumption rose in winter, the 4 month accumulated correction of an additional 50kWh per month was not included in their estimate and when my wife phoned through the actual September meter reading, they made the correction. This added 200kWh to that month’s bill.

At least I knew that the bill wasn’t going to remain double but that it would still be higher than I anticipated. The important thing was to also phone through the next bill or else that would affect the retailers’ estimate and they would be holding my hard-earned coin.

This event did get me thinking that I need to have a bit more control of what is going on with my energy (electrical) bill.

I decided that I need to keep an eye on the pattern (or ‘load profile’ as it is more formally known as) in order to understand how, when, what is using power in my home.

This makes economic sense but as power generation from coal generates, just under 1kg of CO2, it is also good for the environment for me to do this.

You can use these handy little plug-in meters (as below) and make up and inventory of the average of each appliance. This helps you to keep stock of the usage. 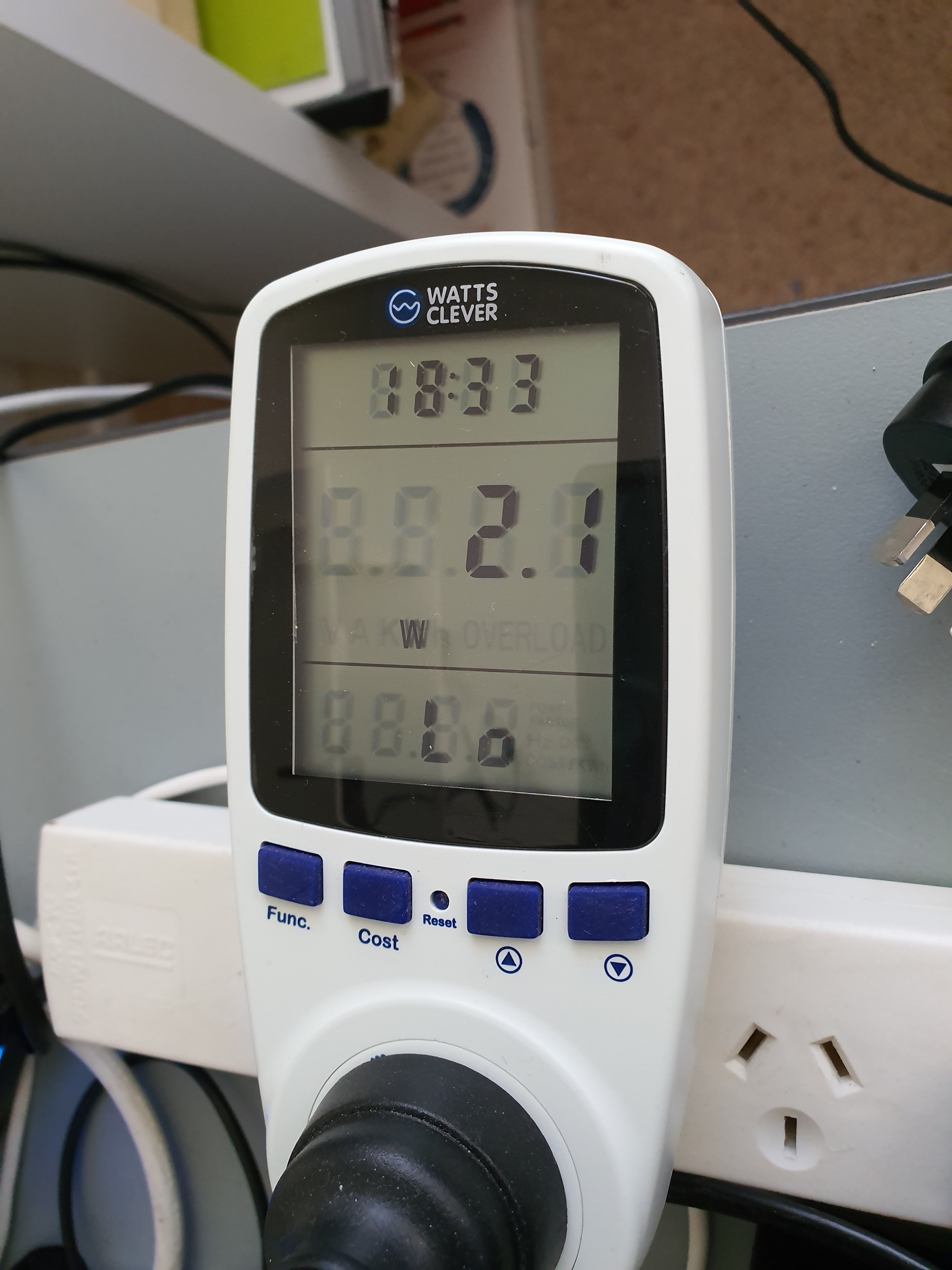 I however decided that I want more information and a trend line which I can view anywhere and possibly also analyse using tools like those available from Thingspeak/Mathworks:

I also wanted to separate my house from my pool pump as I am able to set that timer and maybe optimise the energy that the pump uses within the context of the water quality. I thus searched for an energy meter that I could build and found a few. (See my blog post on how I monitor water quality:

I opted for one based on a Atmel/MicroChip ATM90E32S chip on a printed circuit board (PCB) from a company called CircuitSetup.us and which could communicate using the ubiquitous Wifi chip, the Espressif ESP32.

I also wanted two clamp-on current transformers (CT), one for the house supply and one for the pool supply, which this board allowed for.

The meter would need to derive its voltage reference and power from a plug-back power supply transforming the 230V supply down to 9V ac.

The clamp-on CTs simply clamp around the conductors on the back of the distribution board.

(Note: It is advised to get an electrician to connect these and put a plug socket into the board for you. I was lucky as my board already had a plug socket for electric lawnmowers).

The component elements that I used are shown below, and I put them all in a nice water-proof enclosure with leads for the plug-back and the CTS external to the enclosure.

The Wifi radio cannot transmit its signal through the steel box so I had to mount this box below the distribution board, out of the sun.

As you will read further on in this post, I found the signal strength with this external mounting of the power meter, inadequate for the reliable Wifi data transfers to the cloud service. 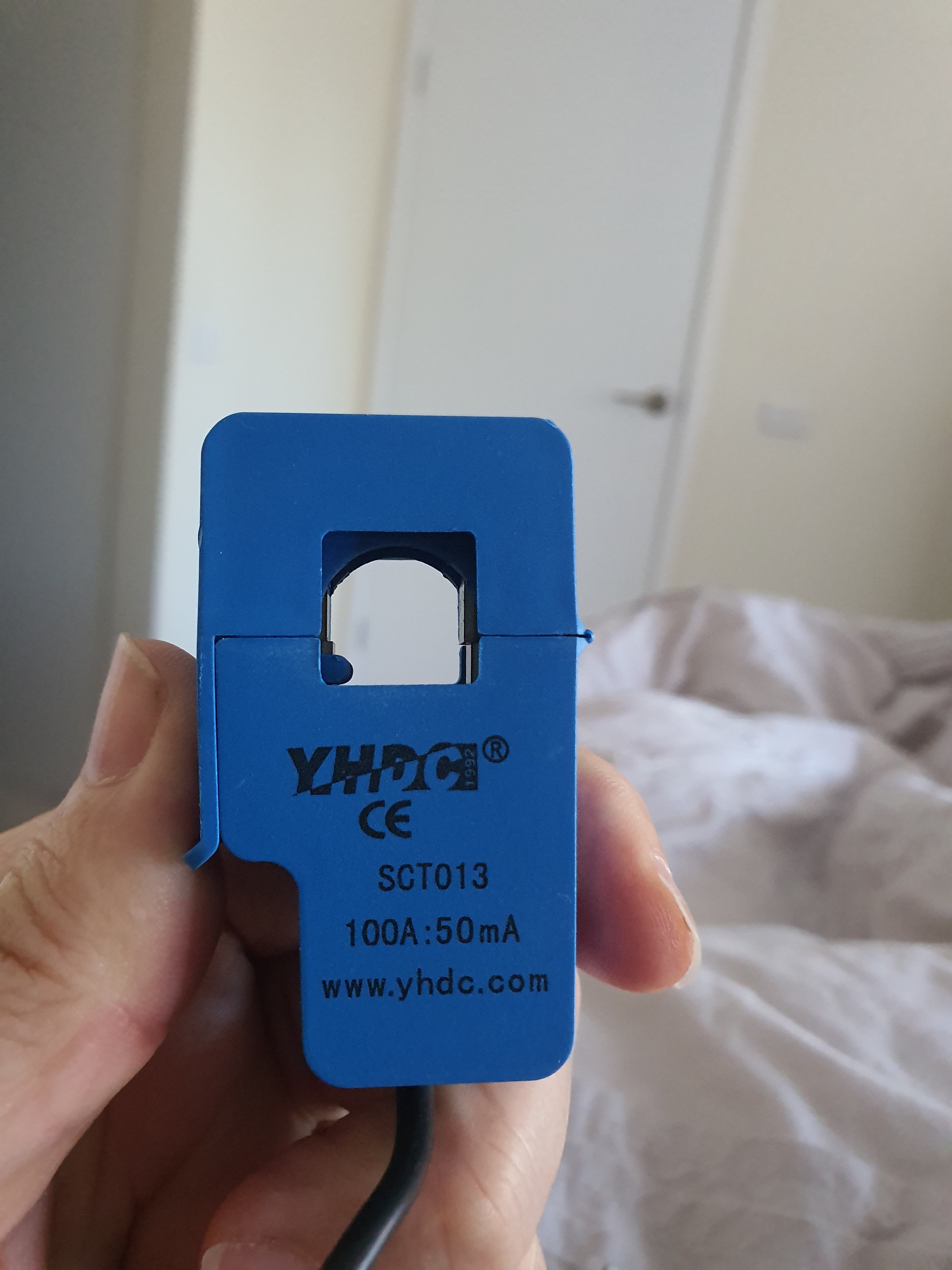 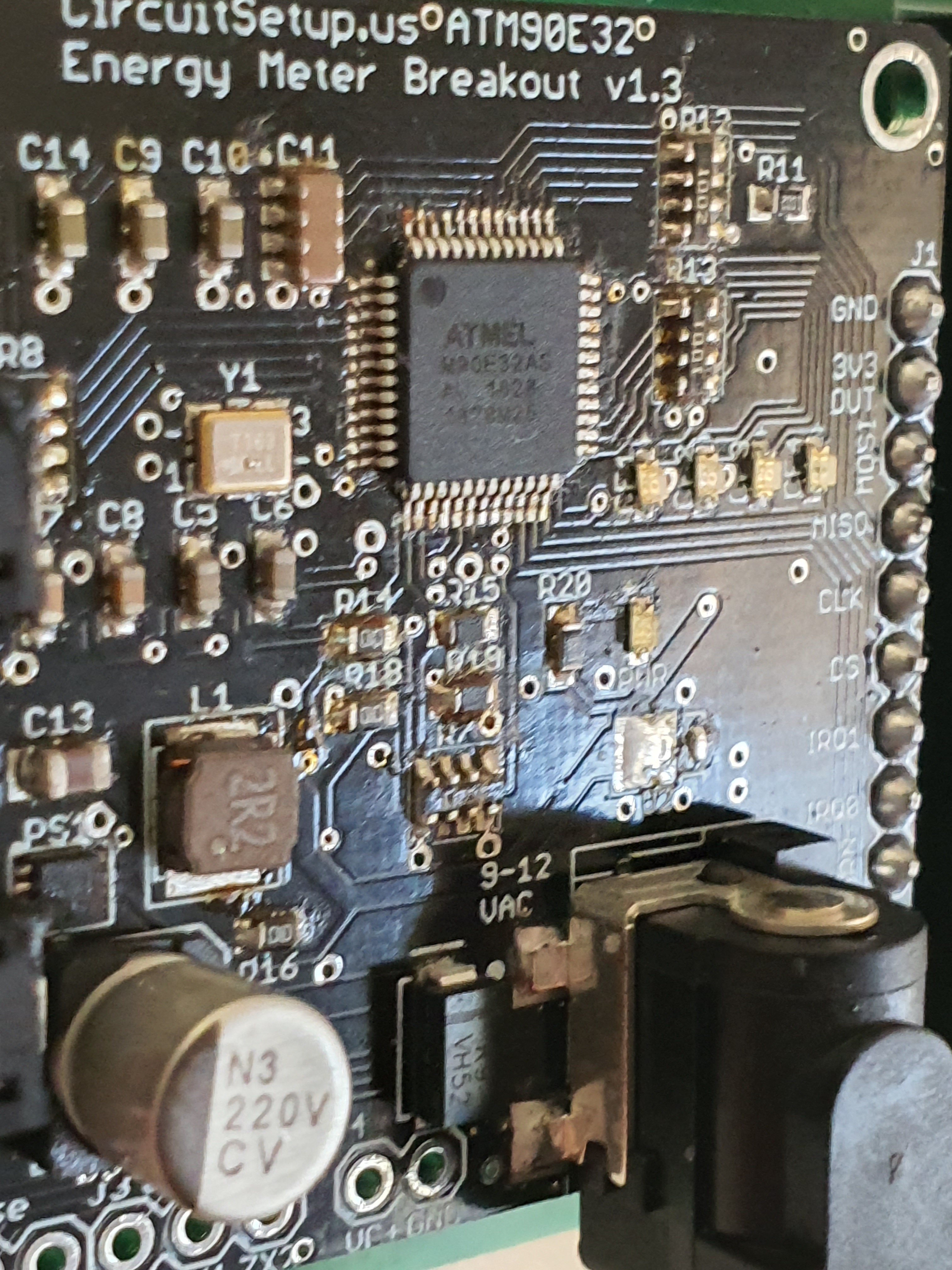 I also got a free cloud account from www.thingspeak.com and set up the Wifi chip to send data to the cloud so that I can look at the load-profiles.

Notice the two times that the kettle was put on to make coffee. By taking a few minutes in the morning and evening to look at these load profiles I can see the overall power trend and can compare this to how the pool filter pump affects the overall numbers (which is currently my single largest power consumer, since it is early summer and there is no need for indoor space heating or space cooling).

If I turn an air-conditioner on I can see the step increase in power in the next 5 minute average value and then know the impact of when I turn things on and off. I now have a very clear picture of what is happening at my house and hopefully should avoid any further bill shocks.

If you want one of these units let me know by dropping me an email at the email on the Contacts page. 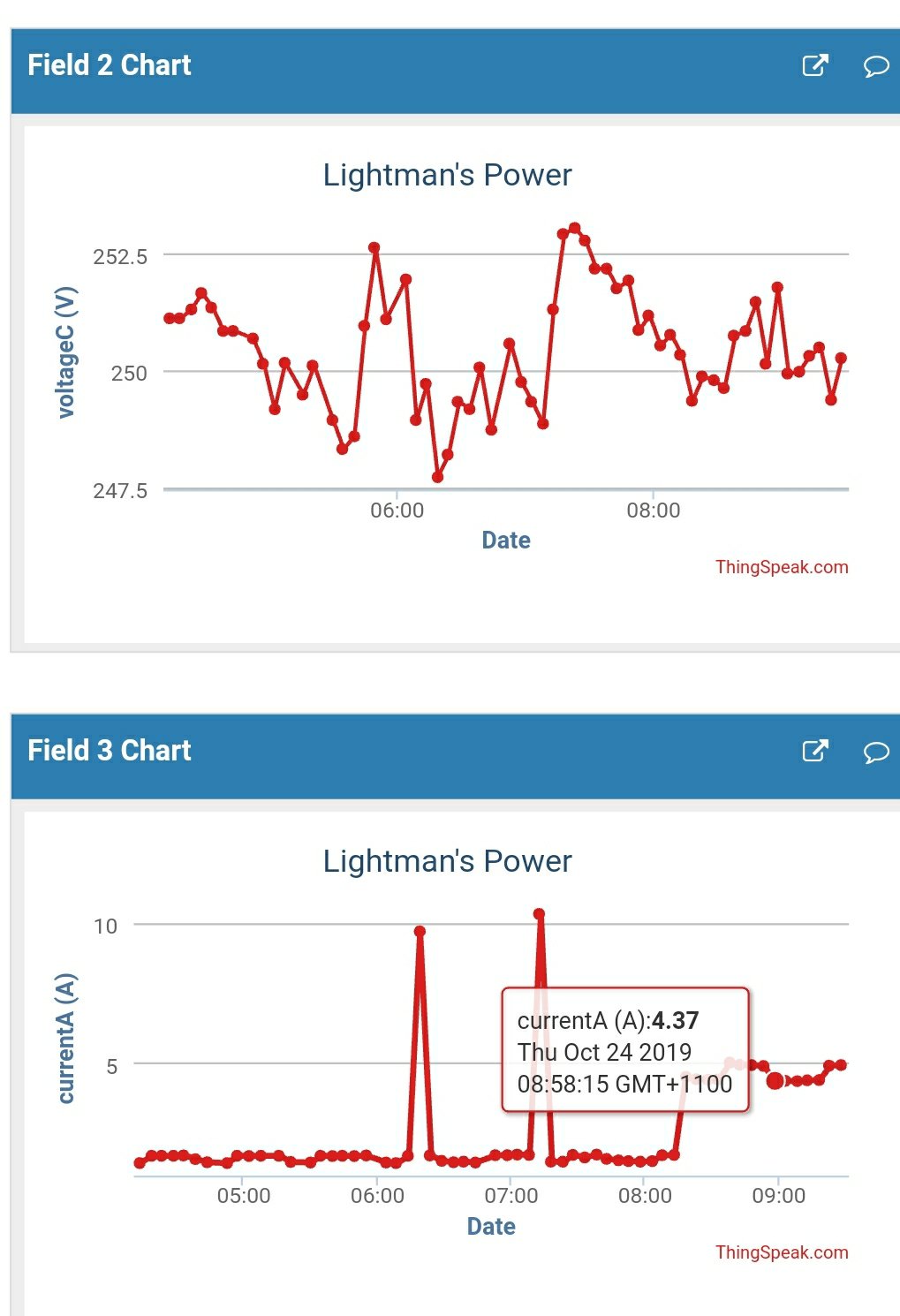 Now I can watch my consumption and turns things ON or OFF to see their impact on the profile.

It’s is always good to see what is out in the market. I came across this system from Smappee which looks good but will cost about double what my CircuitSetup system costs. It does have one great feature which is the ability to discern the different home appliances from one measurement.

We bought 9 Comet (a type of goldfish) and put them in a water plant filled oasis, at least that is what we thought until 6 of them didn’t survive three weeks.

A bit of research and I knew that I need to not only have plants to remove nasties from the water but that I also need to keep the dissolved oxygen high (using a pump and a bit of a waterfall), pH within a tight band and watch the temperature of the water to prevent these events from recurring again.

I built a lovely little Wifi-enabled pH and Temperature sensor and was sending the data to a website.

I then decided that it needs a battery pack and so modified it to accept such a pack and charging from a standard USB lead. I now also use it to check my pool water. I also added oxidation and reduction potential, also called “ORP” as a bit of research tells me this is a good indication of water quality!

I am a huge fan of Thingspeak and the MQTT API for sending data to their cloud IoT ecosystem. For those so inclined, it allows for some rich data analysis and visualisations as Mathworks are the holding company thereof. Mathworks of MATLAB simulation fame. I don’t use their coding framework, as it is proprietary and prefer Python for coding data science scripts. Open source is better in my opinion as the help from community members is far greater than closed communities like those who can afford to buy and then use MATLAB.